Van Diemen's Land- It's Always The Quiet Ones 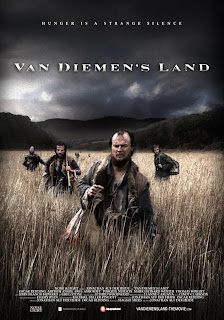 From the very first moment that Van Diemen’s Land starts you know that you are in for a disturbing ride. Underlying the lamenting score is an unpleasant piercing sound; this film is an assault on the senses. You hear the wind brushing through the trees, the rushing water, every twig snap and every bone crunch - the effect is unnerving. There have been stories buzzing around the Internet about audience members vomiting or fainting whilst watching this film, for once this doesn’t sound like it is just publicity hype. There is definitely something physically unsettling about the film - not simply the storyline, but the whole approach taken to tell the story.
Click here to read my full review at Onya
Posted by Beth at 11:10 AM 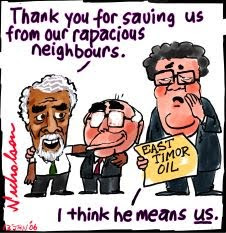 We are all too familiar with ‘issue’ films that follow a white, western protagonist into a troubled developing country (El Salvador, The Constant Gardener, Blood Diamond, The Last King of Scotland). We associate with the moral outrage of the bystander, raging against the apathy of the rest of the world, who ignore the harsh and chaotic brutality. Australian film, Balibo, has received a lot of press, bringing attention to the killing of five journalists in 1975 and the cover-up that followed. The film is political, its purpose to inform and rally. Unapologetically Australian focused, Balibo is concerned with a very small period of time, in what was a long struggle to independence for East Timor. After watching Balibo you should be furious that the truth has been unacknowledged for so long. Balibo should be just the start though, because if we are exploring Australia and East Timor’s relationship, then there is so much more to be angry about.
Click here to read my full article at Onya
Posted by Beth at 9:10 PM 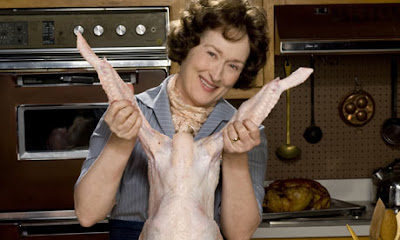 image
When a film is split into two narratives, inevitably there has to be a winner and a loser in the story stakes. If the film is good, the gap between the superior section and the other story is almost unperceivable. Julie & Julia is not one of the good films. It is a run-of-the-mill chick-flick, which is mildly amusing in places. The film’s obvious failing is the canyon-sized gapping hole between the narratives, making the film rather off kilter, with Julia Child’s story being far more engaging than Julie Powell’s.
Click here to read my full review at Trespass
Posted by Beth at 9:02 PM