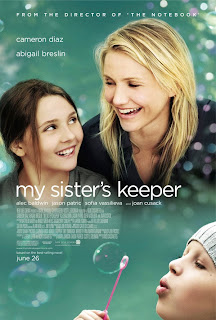 image
The plot for My Sister’s Keeper is very promising. Anna (Abigail Breslin) was born, with scientific help, to be a genetic match for her severely ill sister. Kate (Sofia Vassilieva), who has been battling leukaemia since she was a toddler, has survived due the blood and bone marrow she has received from Anna. Now fifteen, Kate is slowly dying from renal failure. Expected to donate her kidney, eleven year old Anna, decides to sue her parents for medical emancipation.

Author of the highly successful novel, Jodi Picoult, has picked up on a very real concern people have over body ownership. It is a hot topic, which people are both terrified of and fascinated by. The problem is - this is not a film about child rights or medical ownership, it is a family drama, not so much concerned with the big issues as hitting the emotional buttons. click here to read my full review at Trespass. 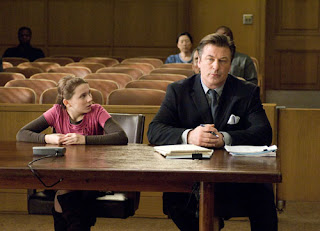 image
I like to think that Alec Baldwin's pained expression in this photo is down to the guilt-trip that Abigail Breslin is giving him over convincing her to sign up to the film.
Posted by Beth at 10:00 AM 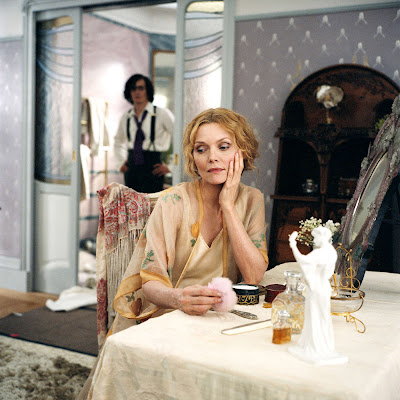 Chéri is a beautiful film, the sumptuous settings, the exquisite costumes and the attractive cast all make the finished product very pleasing to the eye. The storyline of the older woman and the younger man is refreshingly different from the usual male/female dynamic. Michelle Pfeiffer is extraordinarily beautiful playing the retired courtesan, Léa who falls in love with Chéri (Rupert Friend), the 19 yr old son of a former professional rival, Mme Peloux (Kathy Bates). 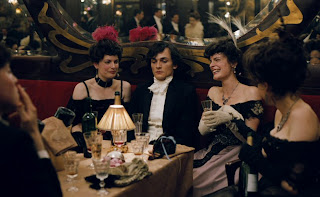 image
The questions the film raises about money and happiness are intriguing. Both Léa and Mme Peloux have invested their money wisely and have amassed an impressive wealth, but they seem unable to fully enjoy this independence. Their freedom comes at a cost, they are separated from polite society because of their profession. There is a sense of tragedy to the film, with each character so intent on self-preservation they can't see that they are the cause of their own unhappiness. 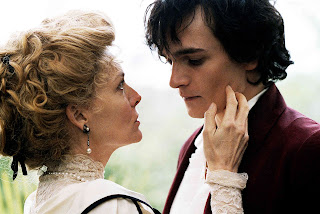 Chéri was not the stock-standard period drama I was expecting. The film poses some nice questions about the hypocrisies of power, money and sex, all displayed in lovely packaging that made the film very engaging.

image
Winner of the Sydney Film Festival 2009, Bronson has been labelled as the 21st Century's A Clockwork Orange. Director, Nicholas Winding Refn has definitely been heavily influenced by Kubrick, creating a highly stylised film. Visually spectacular, the film is full of menace making it both engaging and unpleasant to watch. Tom Hardy is fantastic playing real life prisoner, Charles Bronson. He completely transformed for the part and really invokes the spirit of a lunatic. British comedians, Matt King and James Lance are also very good in their roles, with King ad libbing some of the funniest lines in the film.
Unfortunately though visually arresting, the ultra cool, uber-violent scenes become a little repetitive as the film progresses. The film fails to tackle the more challenging sides of Bronson's personality. Presented as a man who thrives in prison, the question of Bronson being institutionalised is never raised; and the concept of the unreliable narrator is left unexplored. 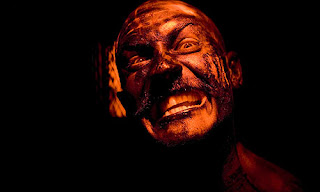 Screenwriter Brock Norman Brock was out during the SFF, channelling the Bronson aesthetic, wearing a snug-fit tweed waistcoat and an impressively large handle-bar moustache. Listening to him speak, you got the impressive that what was on the page and what was on screen were not one-in the same. Brock alluded to some changes in direction for instance. the use of the vaudeville concept, was written in the script as a more intimate nightclub setting. He also spoke about having an interactive audience on screen, questioning Bronson's veracity as narrator.

The film adds layer upon layer of masks and disguises onto Charles Bronson, making it impossible to see even a glimpse of the man, Michael Peterson, who is underneath it all. After years of imprisonment, it now seems Peterson is keen to be released. You have to wonder if this film is going to do him any favours, it paints a less than sympathetic view of him.

Click here to read my review at Trespass
Posted by Beth at 9:55 AM 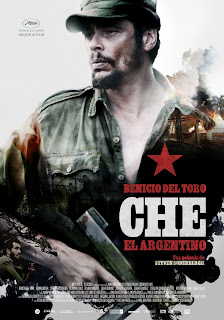 I have written my first film review for Trespass, looking at Soderbergh's Che films. I was lucky enough to be able to see both films back-to-back at the Sydney Film Festival in June. I enjoyed both and thought Benicio Del Toro played the part of Guevara well. I was more intrigued by the second film, The Guerrilla, which focused on Guevara's unsuccessful attempt to bring about a revolt in Bolivia, than the first film's look at the Cuban revolution. Showing his success and failure was clever, but I felt the films' vision of 'Che' was highly romanticised, forcing the marginalisation of many of the interesting characters in his life.

All Singing All Dancing- Every Little Step 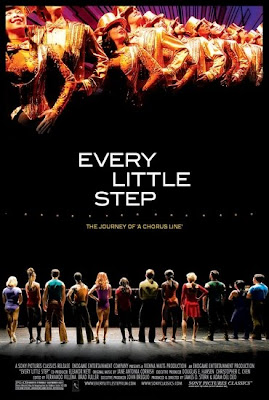 image
I found myself singing 'One singular sensation, every little step she takes. One thrilling combination, every move that she makes.' on a repetitive loop on the way home from the screening of Every Little Step. It isn't my usual post-movie practice to sing the same two lines over and over again, with no hope of finishing the verse, and to embarrass myself on public transport by chasséing along the carriage, but Every Little Step is infectious. It is positive and upbeat, focusing on the casting of the 2006 Broadway revival of A Chorus Line, giving the cinema audience a glimpse into the workings of the musical world.
This documentary has an oddly pleasant self-referential dynamic; watching a film about the casting of a musical, the musical in question being about the casting of a musical. Ultimately both the musical and documentary have the same aim- to highlight the passion and drive that dancers need to have and the barriers they have to negotiate, not necessarily in search of glory, but just to work in an arena they love. The film follows every stage of the auditioning process, from open calls to final casting. Similarly to A Chorus Line, the focus in the film is culled pretty quickly down to just a couple of the roles and the competing performers.

There is a nice contrast between the seasoned professionals and the Broadway-novices. As you would expect, some of the performers are ego-mad, and others self-critical. There are some really funny moments, a lot coming from Tyce (I Know I Can Dance) Diorio, who claims to be über-confidant, but obviously needs to be accepted. Jessica from New Jersey, with nothing to fall back on if Broadway doesn't pan out, turns out to be gutsier than your average wide-eye hopeful. 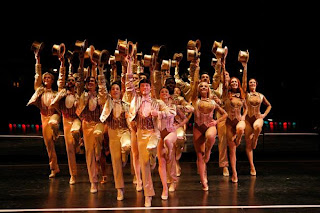 This film is in a lot of ways a fitting tribute to Michael Bennett, the choreographer who created A Chorus Line. He had impressive foresight and an understanding of an audience, who want more and more of the performers on stage. They want to know how the performers got there and why. This is the simplicity of the documentary, it follows the same ideas and allows the curiosity of an outsider to guide it.

Every Little Step also acknowledges the incredible commitment and strength professional dancers have, not only physically- the dancing is spectacular, but also mentally. Their dedication pushed to its limit, expected to drawn on their emotions to inhabit their roles during months of auditioning and scrutiny. It is staggering that performers can end up working hard for long periods of time giving everything they have and still not get the role. This is a concept outside most people's understanding of work, where we expect hard work to be rewarded. Amazingly dancers have to pick themselves up after rejection and just get on with the next audition. 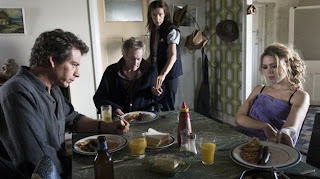 Beautiful Kate received a lot of praise at the Sydney Film Festival, but although the film looked good, with impressive cinematography, it lacked depth in its character exploration and tackling of its subject matter. Director Rachel Ward described the film at it premiere in Sydney as 'a love story with obstacles'. I found this an odd statement, it is not what I got from the film, and wouldn't be what I was looking for in a film dealing with incest. I believe the intentions for the film were good and the cast all gave solid performances, however many good actors were woefully underutilised. My expectations for this film were so high, they were bound to be disappointed.
Click Here to head over to Onya to read my full review.
Posted by Beth at 11:00 AM