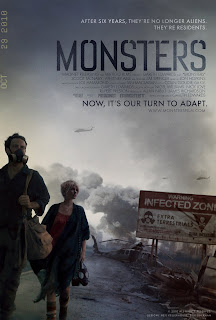 The independently-made sci-fi films that have been popping up over the last two years have more than proved that smaller films in this genre can compete, and in some cases completely outclass, the studio-funded big guns. Monsters is one such example, beautifully crafted from a tiny budget (reported to be anything from $15,000 to $500,000), with a miniscule cast (two professional actors) and a crew of four, including creator, director and cinematographer Gareth Edwards (making his feature film debut).

A road movie, a love story and a travelogue, Monsters is not much like a sci-fi film at all. Taking a unique spin on alien invasion, the film’s premise has similarities to District 9, with alien life forms taking up residence on Earth, in an area that is economically deprived. But here is where the comparison ends; Monsters treads a very different path, creating an engaging and poetically humanistic film.

The story takes place in the ‘Infected Zone’ of northern Mexico, as an unlikely pair of travellers try to make their way northwards – and homewards – to the United States: photojournalist Andrew Kaulder (Scoot McNairy) and his boss’s daughter, Sam (Whitney Able), who he has reluctantly agreed to escort. The film’s success owes a huge amount to the chemistry between its two leads, a couple in real life. While this is an obvious advantage, the quality of their performances shouldn’t be underestimated.

Monsters is a good-looking film, with Edwards creating a lovely visual lyricism from Central American landscapes. As the person behind the special effects he has also created magic in post-production, providing the all-important extra-terrestrial action.

With clever political undertones, an affecting love story and gigantic squid-like aliens, Monsters may just be the best sci-fi film of 2010. 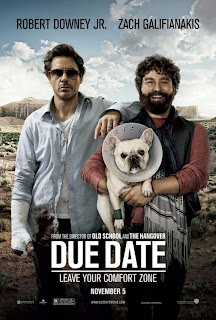 In Due Date successful architect Peter Highman (Robert Downey Jr) is stuck making a cross-country road trip with wannabe-actor Ethan Tremblay (Zach Galifianakis), after they are both thrown off a plane flight by an over-zealous Air Marshall. On a strict deadline, and with his wallet and passport still on the plane, Peter opts to hop a lift with Ethan, in order to get back to LA in time for the birth of his first child, with wife Sarah (Michelle Monaghan). Along the way Peter learns about fatherhood and friendship from his eccentric travel buddy, through a series of incidents that includes masturbating dogs, violence against children, and various car wrecks.

With its gross-out humour and overly manipulated set-ups, Due Date is more cringe-worthy than humorous. The film feels like it has been pieced together from the leftover scraps of funnier, more entertaining films. The writers appear to have a checklist of comedy props – annoying child, ugly pugdog, angry war veteran, scary Mexican immigration officials – that they were obliged to mould into a coherent storyline. Any attempt by the filmmakers to say anything even vaguely true about fatherhood or friendship appears tacked on, as if the only way they can get away with the series of idiotic jokes is to inject in the odd emotional revelation.

What is most disappointing is that Due Date hasn’t been made by talentless hacks, and doesn’t have a second-rate cast. Downey Jr. and Galifianakis could and should have made a more appealing pair for a buddy film, but director Todd Phillips (The Hangover) hasn’t been able to balance the pairing at all, and both come off as highly unlikeable characters. Obviously playing on The Hangover riff that did so well last time, Phillips is too reliant on Galifianakis as a visual gag.

Saying all this, the film has already made back its budget of $65 million at the US box office, with a pretty hefty bit of change on top of that. So there is definitely an audience for this film, and (knowing the laws of Hollywood) an even more depressing sequel is probably already in the pipeline.